Skip to content
May 7, 2020 Geoff Scott
Spread The Word

BBC recently screened a documentary featuring Philipp Tanzer, whom they identify as a men’s rights activist as he attended the 2019 International Conference on Men’s Issues which was held in Chicago.

Indeed if you as I do, follow Philipp/Logan on Twitter (@LoganMcCree777) it becomes quickly apparent that he is a proactive and very vocal advocate for male rights and male wellbeing. 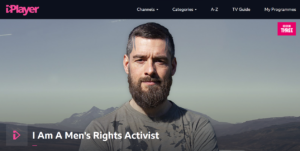 The BBC Three documentary as well as giving a fascinating insight into Philipp/Logan’s character and motivations, also raises some provocative themes relating to whether there needs to be such as thing as ‘men’s rights’ and by association, if there is a need to advocate and lobby for them.

Click Here to watch the documentary for yourself on BBC iPlayer.

So is there a need for men’s rights activism?

Well that depends on what rights we are talking about and whether or not those rights are currently equally held by both men and women.

Initially you might say that there is not a need, surely in all areas of life, men have equal (if not superior) rights to women, so why would we need to advocate for any improvement in their rights?

If we think of rights conferred on individuals in a society via mechanisms such as the law. Then it is already illegal for anyone to be treated less favourably that another on the basis of the sex they were born (or identity as). However, we all know that although that legal protection on the basis of ‘sex’ is already in existence, we all can think of many instances where it is not enacted in our society.

Yes of course it is entirely unacceptable for our society to treat a women less favourably than a man in areas such as employment, state entitlements, access to services and support and personal autonomy.

It is also just as unacceptable to treat a man less favourably that a woman in any of these ways. Surely that does not happen you say.

Firstly lets look at employment, according to (Statista) unemployment rates for men are higher than those for females.

If we look at state entitlements, it was only as recent as 2016 that the UK moved to equalise the age at which men and women could retire/claim a state pension. Up until that point, men where expected to work longer than women before they were eligible for this benefit, was that an example of equality?

When you combine the fact that men were expected to work longer than females with the (Office of National Statistics) data that still, men tend to live for 3 years less than women, this means that men in general where given less time by the state to enjoy their retirement than women, does that seem fair?

If we turn our attention to access to services and support, take a look at the (Did You Know) section of this website and look at the statistics highlighting differences between male and females in terms of psychological and physical health and educational attainment. In so many dimensions of psychological and physcial health, men fair poorer than women. They also tend to not perform as well in education compared to their female counterparts.

Now nobody is saying that men do not have already the same rights to access psychological/physical or educational services and opportunities that women do, but looking at the outcomes it is clear that their uptake of services and support is not at the same level and/or when they do, they do not achieve similar outcomes.

Finally we turn our attention to the issue of equality of opportunity for personal autonomy. As a counsellor who predominantly works with male clients, I am not the best placed to comment on where females are in terms of being able to exercise their right to self-define, but I can comment on where male client after client of mine is.

Without fail, almost every client I have worked with has either consciously or unconsciously absorbed and been influenced by what ‘others’ think a man should be and how he should act. Is that personal autonomy? Is that being given the right to self-define free of social convention, judgement or criticism? I would contest it is not.

In conclusion, is there a need for men’s rights activism, I say yes.

Equality for all is the goal. However, there currently are many areas of life and existence where the status is not equal for men and women alike. Women absolutely have the right to ask for, demand, expect and receive parity with their male counterparts. Men absolutely have that right too. Men have the right to the same lifespan, the same levels of physical, mental and emotional wellbeing, parity of educational attainment and the right to decide for themselves the type of man they want to and are going to be.

Fair play to Philipp/Logan for taking up the cause, keep fighting that good fight.