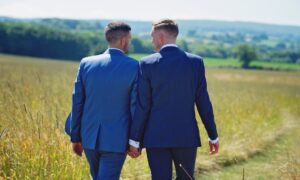 In the 21st century it would be nice to think we are living in cultural and social ‘enlightened times’, whereby individual difference, diversity and deviation is accepted, accommodated and respected in our modern society.

The world’s population currently stands at approximately 7.8billion people, The UK (England, Scotland, Wales and Northern Ireland) alone has a population of over 66 million.

Human beings are not a homogenous species, our populations are made up of a varied and enriching range of individuals of differing nationalities, sexes, ethnicities, religions, ages, occupations, social classes and cultural backgrounds.

Sexuality is defined by the Cambridge Dictionary as: “Someone’s ability to experience or express sexual feelings, attitudes and activities relating to sex.”

As with other human characteristics, human sexuality and sexual experiencing is also not homogenous. It is a varied and societally enriching spectrum of individual and unique perspectives, attitudes and expression.

Way back in 1948, the Kingsley Scale was developed as a method to help define an individual’s sexual and romantic orientation. Its rather simplistic 8-point scale proposed a spectrum of human sexuality that went from being exclusively attracted to the opposite sex through to being exclusively attracted to the same sex, with every individual being at some point on that spectrum (excluding those who experienced no sexual or romantic attraction).

Alongside differences in sexuality/sexual experiencing there is also increasing recognition of a wider diversity and self-identification in terms of gender. The BBC website outlines the distinction between sex and gender as follows: “Our sex, which is physical – male or female – is distinct from our gender, which is psychological and social. What this means is that some of us have a gender which is different from our sex.”

Bear in mind too that figure of 1.2million was only an estimate. How many people are out there on top of that number who either do not publicly declare their sexuality or who do not fall into the classifications measured by the Office for National Statistics?

The Stonewall website estimates that in the UK, there might be approximately 1% of the total population that identify as trans (including non-binary), that 600,000 people.

Although it is almost impossible to get exact figures, what cannot be disputed from these statistics is there are a large number of individuals living in our society who do not identify as ‘heterosexual’. You can guarantee those individuals are making an invaluable contribution and are an integral part of every family, street, community, town, city, industry, profession and culture throughout the UK.

That being the case, in our ‘enlightened’ 21st century society, are those that we may perceive as different from us (in terms of sexuality and/or gender) accepted, accommodated and respected?

Well, bear in mind that it was not until the introduction of The Sexual Offenses Act 1967 that private sex acts between consenting men over the age of 21 was no longer a criminal offence in England and Wales. Scotland did not follow suit to decriminalise homosexuality until 1980 and Northern Ireland took until 1982.

Back in the 1980s, the notorious “Section 28” amendment banning the promotion of the ‘acceptability of homosexual lifestyles’ in schools.

That means there are many LGBT+ individuals around today, that have experienced in their lifetimes these legal inequalities that undermined a culture of acceptance, accommodation and respect of who they are, and whom they chose to love.

Even more disturbing, the BBC website reported that the levels of homophobic hate crimes trebled from 6,655 in 2014-15, to 18,465 in 2019-20. Just as shocking, the Pink News website reports that 4 out of every 5 transgender individuals in the UK had experienced hate crime in the past year.

Worryingly, even as laws were changing to finally legally recognise equality for those who are not heterosexual, negativity towards this segment of society seemed to increase.

Although there are now laws in place in the UK to recognise that those who are LGBT+ are most definitely equal citizens, entitled to the same rights as their heterosexual counterparts under law, it would seem out society still has some way to go to catch up to treating each other as equal.

Although it may be at times difficult, it is vital that we as a society and as individuals take on and challenge intolerance and prejudice and encourage every individual to embrace and be proud of their sexuality and gender and to decide for themselves without fear or compromise, the type of life they want to live that empowers them to achieve their personal potential and thrive.

Step 1: Coming To It (Your Personal Journey of Recognition and Acceptance)

Others may hold negative opinions or views on sexualities and genders that are different from their own, but you do not have to de defined by or view yourself through their ‘eyes’.

No matter what age you are (sometimes people do not come to a full awareness of their sexuality and/or gender until later in their lives) it is your right to self-define how you want to live your life, nobody should be forced into a particular path relative to their sexuality and/or gender by another, or by a perception of what might seem ‘socially acceptable’ to those around us.

If you live your life trying to please others and live up to their expectations of who and what you should be, not only will you be entirely exhausted by having to read and interpret what every person you meet expects from you, this path will also ultimately fail at some point as no individual can be ‘pleasing’ to everyone (somebody will always not like you for the colour of your hair, your skin tone, the way you dress, the way you speak etc.).

If you come to a recognition within yourself that you are of a sexuality/gender that might be ‘different from the ‘norm’, start your journey towards a happy and fulfilling future by accepting and embracing who you are.

Others may have an issue with it, but that is their issue, not yours!

Feeling embarrassment, guilt or shame about what is an innate part of your uniqueness will only lead to misery and unfulfillment and will also not change who you are. So strive to be happy and proud within yourself.

Step 2: Coming Out (Deciding Who To Bring Into Your LGBT+ Life)

Once you have embraced who you are, for many people the next stage on their journey is deciding whom (if anyone) they want to share and include in that aspect of their experiencing.

There are no rules here you have to follow. Decide what is right and feels comfortable to you. Some may decide to keep that part of themselves totally to themselves, others will share with a few trusted individuals who are close to them. For others it seems right to share their sexuality and/or gender openly with everyone they encounter in life.

There is no one way to be LGBT+, you do not see heterosexuals going around feeling compelled to disclose their sexuality and/or gender identity to everyone they meet, and you are also not compelled to do that either.

You have a right to be private about your sexuality and/or gender if you want to. Equally you also have the right not to feel like you have to hide who you are if you do not want to.

Go at a pace that suits you and share with whom you want and only if you want to.

The reality of life is if you do come out to people, they might not all be immediately accepting, accommodating and respectful. Here the consideration is whether that is as a result of grief, ignorance or prejudice.

For some you share with, they might need time to re-adjust and ‘grieve’ for a perception of you they have held in their heads for a long time. Although this can be painful, it does not necessarily come from a place of judgement, it can be about needing time to adjust to change.

For others the issue may be ignorance, maybe they have never knowingly engaged with someone who is LGBT+ and as such are unsure about how to act and have no understanding of that way of being. In that case, gentle education may be the answer.

There will be a third group (hopefully a small one in your life) who are inherently prejudiced and who hold views that oppose your sexuality and/or gender identity. With those individuals, never let their views become yours.

So you have come to a place of peace with your own sexuality and/or gender and have decided whom you are going to share that aspect of yourself with. The third part of your journey is deciding the type of LGBT+ life you want to live.

As with your sexuality and gender, the life you live and how you live it is yours alone to choose.

Conversion therapy is the pseudoscientific practice of trying to change an individual's sexual orientation from homosexual or bisexual to heterosexual using psychological, physical, or spiritual interventions.

The British Association of Counselling and Psychotherapy (BACP) is a joint signatory to Memorandum of Understanding that makes it clear that conversion therapy in relation to either gender identify and/or sexual orientation is unethical, harmful and not supported by any evidence.

A heart-breaking article on the Metro website in 2020 highlights some of the horrific consequences of this despicable practice.

The BACP’s position is one that MANN uP entirely agrees with and whole-heartedly endorses.

MANN uP is committed to supporting individuals to advance in their wellbeing and help them to achieve their full personal potential.

Although coming to terms with one’s own sexuality and gender identity can be a challenging and at times painful process, MANN uP will never work with someone in a way that is aimed at ‘changing’ who they are.

MANN uP is committed to working with you to help you accept, accommodate and respect that part of you.

Other Sources of Connection, Community and Support

There are lots of community/voluntary organisations who can offer advice, support and community for those that identify as LGBT+ a few of them are listed as follows: