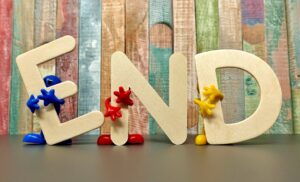 When you think about it, we all will encounter many endings in our lives that we will have to deal with, whether we want to or not.

Indeed, endings are often something that are essential to take place before we can move onto a new chapter in our lives. Often something will have to end in order to free us up for something new to begin.

Endings are not always something we would wish for, or even something we can control. As a result it is very natural to see an ending as a loss in our lives. A loss we may need to grieve for in order to be able to move though and beyond.

Whether it is being able to find the strength and fortitude to respond to an unplanned/unwished for ending, or being able to find the courage to make a plan to end something that is no longer right for you, understanding how endings impact on us can help empower a more conscious way of responding when those future endings arise.

Take a few moments to reflect on all those endings you will have experienced so far in your life to date. There are those that we can look at and see as an obvious ending, and others that might be a bit more subtle to discern, but which equally impacted on us. Some examples of endings we will encounter in life include:

End of a Life Phase: That point in life when we realise that one phase of our life is ending and we are entering a new one. That could be the end of childhood freedoms as we take on adult responsibilities. The end of being a ‘free agent’ when we enter into a committed relationship and/or become a parent. The end of feeling ‘young’ as we enter middle age. The end of our working life as we enter into retirement. Or even the end of our existence as we approach our own mortality. None of us can stop time/aging, so we will usually progress through these life stages. We will have to end one stage before we can enter the next, whether we want to or not.

Ending of a Relationship: This could be the ending of a friendship or a family or romantic relationship, or through bereavement, the permanent ending of a relationship with someone you have been bonded to and/or connected to. Sometimes these types of endings are our choice, other times they are at the other party’s instigation, and in the case of death, the relationship ending is not wished for or preventable by anyone.

It is a cliché but human beings tends to be creatures of habit and as a result we can resist, resent, and at times struggle with endings, as they will whether we like It or not, bring about change within us and within our existence.

In life, change, including change brought about by endings is inevitable. By deepening our own individual understanding of how we are likely to react to endings, it can help get us through the tough times associated to an unwanted ending, and embolden us to at times make choices to proactively end what is no longer working for us.

Even if we think of an ending as something we have planned, or have time to plan for, when the reality of that ending arrives, it can still send us into psychological shock for a period of time.

With a planned ending, especially one that we have planned for and would wish, there can be more of a sense of being in control of the decision and process  However, no matter how much we plan, life can throw up unanticipated out workings of that ending, that we also will need time and space to adjust to and integrate into our mental and emotional experiencing.

We are all unique and as such will respond to endings in our own unique ways. How we respond can be connected to our history of endings in our life, how they impacted on us, and how we were supported to deal with them. An ending can be a means to develop greater levels of self-insight and wisdom, and often highlights areas of self that may be ‘unfinished business’ which need to be attend to.

How to Respond to an Ending?

Give Yourself Time to Grieve: It is generally accepted that in the case of bereavement, there are 5 recognised stages of grief.  These are: denial; anger; bargaining; depression and finally acceptance. Look at these stages when you experience any ending in your life, are you moving through them? If not is there a certain point where you have become ‘blocked’ and need support to move on? Any ended needs to be grieved for to place something that was into the past, to free us up to look to and move into the future.

Take Control Where You Can: Endings, in particular unplanned ones can make us feel like we are not in control of our lives. Even if the ending is not something you can control, there may be aspects connected to it that you can take control of to help you feel more empowered.

For example, you may not be able to control your partner wanting to end the relationship, but you can attempt to take control of how you process and act out your mental, emotional reactions. Not by trying not to have any reaction (you are human), but by giving conscious attention, either alone or with support, on your options for processing the thoughts and feelings that ending has provoked.

Focus On a New Way Forward, Not the Way Back: Sometimes dealing with an ending it about coming to an acceptance that there is no way back to the life we had before the ending occurred, and investing effort to ‘get back to what was’ will be pointless. Rather use that energy to focus on building a new pathway in your life that incorporates that ending, and the associated changes it brought into your life, into a new way forward for you.