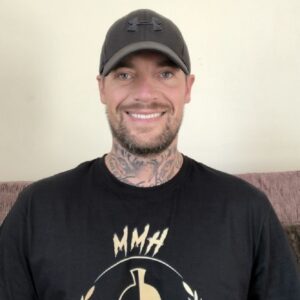 I am from Torquay in South Devon.

I am the founder of MMH Warriors, a man’s club for fellow males who struggle with mental health issues.

I intend to make MMH Warriors a friendly safe space where men can come and share their problems and struggles.

I grew up myself struggling with mental health problems.

In particular struggling with Borderline Personality Disorder in my adolescence and in my early twenties.

As a result, anger was a big part of my life. Emotional instability and volatility can often be a symptom of Borderline Personality Disorder.

As I adjusted to a mental health diagnosis, I was changing my state from feeling insecure and sad to angry, which I thought made me feel more empowered.

Initially I felt like I had more confidence, and I was in a stronger position by portraying myself as an ‘angry man’. I thought I had better control of my emotions, but what I realised is that anger was a very bad state to change my emotional self too, and it didn't do me any favours.

As I allowed the anger to consume me and take over my life, I started doing stupid things and acting out of character. I was frequently getting into trouble with the law, and would end up fighting on the streets a lot, which nearly got me sent to prison on a number of occasions.

Anger just built up in me, along with frustration, I just couldn't release it. I didn't know how to release it. I was constantly living in a heightened and volatile emotional state. I was suffering, and everyone around me was suffering as well.

Until one day, I actually did an anger management course.

I learned some fantastic ‘tools’ on that course. It helped me see how I could control anger, and how to spot anger building within me, before it erupted and overflowed.

I actually ended up doing two anger management courses over that year, and started to gain more control and awareness. I would say awareness is the key word because previous to that I didn't know what was happening for me.

I didn't have any understanding on the topic. So I was just acting out. But after the courses, and a few more years of therapy, I really started to see the pattern of behaviours connected to my anger, and the triggers for my anger outbursts, and then realised not to put myself in certain situations that could be provocative, and also the importance of taking time for myself.

Finding ways to safely release my anger, whether it was physical training, or breathing exercises, or just taking time out for myself and going for a walk, helped me to ‘empty the glass’ when it was overflowing with stress, which in the past would have inevitably overflowed to the point of a meltdown, and my losing my temper.

That was the turning point for me. I realise as I've got that much older, just stepping back, creating some space and distance, and thinking “Why do I feel this way?” really helps. Because there's always a reason behind the feeling of anger, and it's generally hurt.

In the past, I was hurt and upset with my childhood, the relationship that I was in, and my home life wasn't a happy place. So out of pain, frustration and hurt, I turned it to anger, which didn't serve me at all.

Now, as a more mature man who's lived a lot more of life, I realise that one of the very best things you can do is to look out for yourself, and be kind to yourself, and when you feel that stress building, or the sad things happening, just notice it and create that little bit of space for you.

Even if it's five minutes, just take yourself of to another room, do some breathing exercises, listen to some nice music, or put something funny and entertaining on the TV. Just do something to redirect your mind just to break that habit of feeling angry and immediately acting on it.

I hope I have given you some useful tips on how to notice your anger building, and how to start to control it. Take time to get to the bottom of where the anger is coming from, and what it is trying to tell you.

I've always say prevention is better than cure. Rather than having to deal with the aftermath of losing your temper, and getting angry and doing something that you might live to regret, try to prevent it erupting at all costs. If you do lose it, use that as a learning exercise to help you be better equipped to respond next time around.