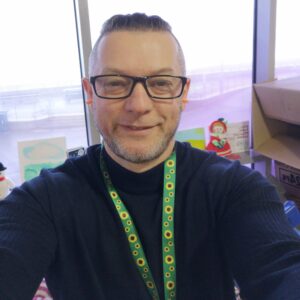 My name is Mark, I've worked in Health Social Care for nearly 21 years, 14 of them in Mental Health.

In 2014 at the age of 42, I experienced an emotional breakdown whilst at work which was to change my life significantly.

This was triggered by rapid and aggressive thoughts and ruminations over a period of time that gained momentum finally impacting on my wellbeing.

Sadness drowned my entire existence like a tsunami. It would take me nearly nine months to eventually reach out to speak with someone..

I came from a working class family and whilst growing up I had a feeling of emptiness, a strong sense of detachment from the world, struggling with Identity and that hope of belonging.

I had a constant fear of rejection and feeling different from others, but most of all of being alone. I was delivered into care at the age of 14, being moved around and living with foster families from that point.

My lack of motivation and enthusiasm depleted over time. I had no interest in life, ignoring the needs of my wife and children, purely just existing.

My patience quickly began to run thin, my tolerances diminished and irritabilities swamped me. Agitation alongside anger appeared very evident within.

Again my low moods triggered thoughts of suicidal tendencies and ideations, wanting to rid the torturous anguish riddled in my mind. These relentless emotions turned into repetitive depressive episodes lasting at times for months on end fluctuating as time passed by causing a darkness I felt I was unable to be free from.

My self-esteem, my purpose, turned into solid perceptions that I was merely worthless. I became very selfish with no care for others. Depression had me clearly in its grip, a feeling of walking in thick tar without the physical ability to walk forwards. Depression entwined itself like the roots of a tree strangling me until I surrendered.

After my initial discussion with my GP, he prescribed some anti-depressants then referred me to attend 'talking therapies' then psychotherapy, both didn't help with how I was feeling.

I was then  referred to see a counsellor. On my second visit she informed me she wasn't happy with my presentation, identifying there was something not right. She referred me to the local Mental health services for assessment. This was to be the best intervention in meeting and supporting my needs.

On my first assessment It was suggested I may have Autism. My first thought was one of disbelief, although I didn't know too much about Autism I began to do some research and immediately realised a vast amount of autistic traits complimented a lot of my own traits and behavioural patterns significantly.

This astonishingly made sense straight away. Throughout my childhood I had strong feelings of disconnection, a feeling I was different from others. Subsequently the assessment process got underway leading to a pathway for a diagnosis.

My Mental Health care coordinator identified I had overcontrolled emotions with passive aggressive behaviours. Whilst the autism pathway was in its process, I started a thirty week RO therapy (Radically Open Dialectical Behaviour Therapy) treatment plan.

This therapy finally helped me to move forward to finally function on a day to day basis allowing me to use personalised coping strategies and mechanisms to manage my depression and enhancing my quality of life..

On my journey of self-discovery and healing, I began to spread awareness in the community. Setting up a private Mental Health hub called ‘Lifelines’.

I am also encouraging others to reach out and talk, to break the stigma attached to men's health, including doing awareness talks in colleges, radio interviews, writing articles and much more.

I had my story published in a Book called 'Big Boys Don't Cry' leading to working with a publisher and creating a book of personal quotes called 'My Survival Book of Quotes' which is in my pen name as Thomas Reed.

On the 14th of December 2021 I was diagnosed with ASD (Autism Spectrum Disorder). I finally found self-acceptance. I continue to work full-time, support my family.

“It's those who look at us through obscurity, seeing only what they want to see and not what's beneath our skin, what's deeply etched within our heart. All that goodness we have isn't always visible to everyone, it's judgement's  seen through broken glasses stained with one vision only....”