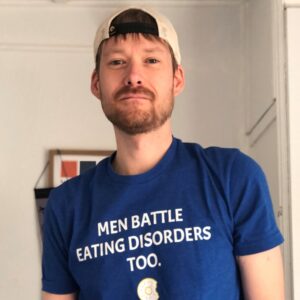 I’ve turned my battle with orthorexia into a mission to break the stigma around men’s mental health and eating disorders by launching my blog Orthorexia Bites.

Through numerous podcast appearances, speaking engagements, and my memoir Starving for Survival, I am starting an important conversation that encourages everyone, especially men, on how important it is to speak up and get the help they deserve.

When not advocating for mental health awareness, I enjoy cheering on the Iowa Hawkeyes and exploring my new home state of Colorado with my husband Matt and our pups, Arnie and Walter.

For years, I assumed that eating disorders were all about food. I bought into the stereotypes telling me that only young females developed either anorexia or bulimia. I was blind to the fact that eating disorders come in many different forms and can impact anyone. Perhaps, that is why it took me so long to finally seek treatment.

In recovery, I’ve learned that my unhealthy relationship with food stemmed from an unhealthy relationship with myself. I battled suppressed pain from losing my parents at a young age, while I tried to “act like a man” and mask the pain. I was haunted by insecurities and anxieties because of the turmoil that followed their deaths, including my bouts with homelessness, drug and alcohol abuse, arrest, and the crumbling of my family. I blamed myself and thought that I was a disappointment and failure. Further, I wrestled with internalized homophobia. I was embarrassed by being gay and felt like something must be wrong with me.

The turning point came when my therapist suggested I write my story in hopes of making it easier to share my battles with my friends. After writing my story, I read through it and quickly realized that I was doing the best I could while in survival mode. This objective perspective allowed me to gain compassion for myself.

Summing it all up, what has recovery taught me? I’ve learned to ignore the stigmas and stereotypes that exist. I’ve experienced the tremendous power of embracing vulnerability, being authentic, and sharing my story. I understand now that recovery is a process and there will be good days and learning days. And above all, I’ve learned to love myself because I am enough and always have been.